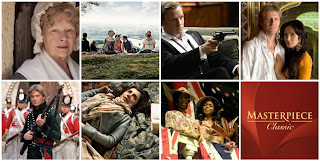 So, the 2010 season of Masterpiece Classic has come to an end. We were promised something different and we certainly got it. All in all, I didn't find this season to be particularly bad, it just wasn't all that wonderful either. There just didn't seem to be a real standout performance this year (compared to Little Dorrit, Bleak House, Cranford, and Jane Eyre in seasons past). This year, I really could just take or leave most of the performances. Anyway, here is a rundown for this season and my rankings for each show from least to most favorite.

#7 & #6: Sharpe's Challenge & Sharpe's Peril. I actually didn't watch either of these. For those of you who don't know, this is a series of about 14 different films that have been made since the early '90s. It is set during the Napoleonic Wars and stars Sean Bean as a rifleman who rises to officer from the ranks. Normally, this would be my family's cup of tea, but after watching the first three episodes, we just ran into some things that we didn't really care for. So we passed on these two episodes.

#5: The 39 Steps. One of these days, I'm actually going to get to see Rupert Penry-Jones in something that I can admire him for besides his looks. Between the historical inaccuracies, the lack of personality in the main character, and that God-awful ending, this just wasn't worth staying up late for. Give me Hitchcock any day!

#4: Small Island. I did actually enjoy this film more than I thought I would, especially Hortense and Gilbert's side of it. It was interesting to see the them of racism from the other side of the pond. Overall it was interesting, different, and thought-provoking, but still a little too modern for my tastes. Not bad, just not for me.

#3: Emma. Again, I enjoyed this more than originally thought that I would. It could honestly have been much worse. Points for scenery, length, and Blake Ritson. Ultimately, it ranks in the middle because it was not the best adaptation of the story, plus I'm getting rather Austened out. It's time to move on.

#2: Return to Cranford. Gosh, it was so great to see most of our favorite characters again. I had some mixed feelings on it as a whole, but there were still so many touching and beautiful moments to be found. Definitely a must-see for anyone who enjoyed the original!

#1: The Diary of Anne Frank. This was one of the most powerful films that Masterpiece has brought to us in a while. Even though I was familiar with the story, I was moved to tears. It was such a touching tribute, not only to the thousands who perished, but to the spunky little girl who didn't get the chance to fully grow up. If you didn't see this one, do so ASAP.

As I said, I wasn't overly impressed with this season overall. I did continue to enjoy Laura Linney's introductions and hope that she will return for next season. Anyway, we'll just have to sit back and watch our DVDs until the powers that be decide what to serve us next year. Until then....
Posted by bookwormans at 11:01 AM