Lady Almina and the Real Downton Abbey: The Lost Legacy of Highclere Castle 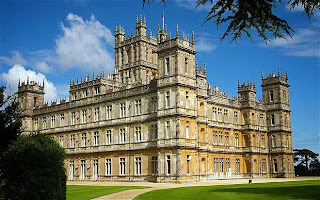 It is no secret that Downton Abbey is a world-wide phenomenon.  For the past three years viewers have watched it, discussed it, and bought any number of related merchandise.  We've obsessed over the characters, the costumes, and the house.  It is so popular that it even has a cameo in the new Iron Man movie.  Those who watch the show know that the estate itself plays such an important role in the story that it is almost its own character.  And like all of the other characters, there is a true story hidden inside of the fictional world of Downton Abbey.

In Lady Almina and the Real Downton Abbey: The Lost Legacy of Highclere Castle, the current Countess of Carnarvon (Lady Fiona) relates the true history of the house during the period covered by the first two seasons of the show (1912 through World War I), and in particular the story of it's mistress, Lady Almina who served as inspiration for the character of Lady Cora Crawley.  The illegitimate daughter of the wealthy Alfred de Rothschild, what Almina lacked in pedigree she made up for in money.  This bought her way into the upper echelons of English society where she would meet he future husband, the Earl of Carnarvon.  Her wealth was just what his estate, Highclere, needed to get back on track and his family gave Almina the social pedigree she lacked.  The Edwardian era was one of splendor and abundance at Highclere Castle, but it would soon be overshadowed by the horror of World War I.  It was during this time that Lady Almina showed her true strength as she worked tirelessly to turn Highclere into a premier hospital for wounded officers.

This little biography is a nice little read.  Though not a scholarly work by any stretch of the imagination, it certainly gives us a nice inside glimpse into a world that most of us can't really understand.  The first part of the book was a little disappointing.  It didn't really delve too much into the downstairs world, but rather focused on the parties, the famous guests, and what Lady Almina wore.  It is only after the war starts that we get some truly interesting stories, including some touching tributes to the brave young men who lost their lives.  I found the most interesting portion to be that which talked about the Earl of Carnarvon's love of Egypt and his partnership with Howard Carter to discover King Tut's tomb.

As an entertaining story, this is a charming and fast paced book.  As history, it is lacking in some areas.  Don't bother if you are looking for true and meaty historical accounts of Edwardian England, upstairs/downstairs relations, World War I, or the discovery of King Tut's tomb.  However, if you love Downton Abbey or are looking for a fresh and easy read relating to the above topics, then this is for you.  A fun read for any fan.
Posted by bookwormans at 12:30 AM