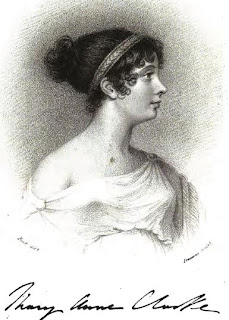 She thought of her vestal virgins in Boulogne and George in his regimentals, stiff and pompous, and suddenly none of them mattered, not even George; she was home where she belonged, in the heart of London.

In 1954, British author Daphne du Maurier turned from her Gothic romances like Rebecca and My Cousin Rachel and instead wrote a fictionalized account of her great-great-grandmother.  She tells of political intrigue, scandal, and revenge during the Napoleonic wars.  But more than anything she tells the story of a woman who overcomes her poor Cockney upbringing to find herself holding power over some of Britain's most influential men.

Born into a poor London family, Mary Anne Thompson grows up having to use her quick wit and feminine charms to keep her family off of the streets.  At a young age she impetuously marries Joseph Clarke who ends up being a gambling alcolholic with no sense of duty to his family.  Disgusted and desperate to keep her family fed, Mary Anne leaves Joseph and supports them all be "entertaining" men of position and wealth.  Eventually, she finds herself mistress to Frederick, Duke of York and living in style.

But the Duke does not understand money and Mary Anne has a hard time keeping up with the massive debts incurred to obtain her lavish lifestyle.  With war looming and many young men eager to obtain commissions in the Army, she begins using her influence with the Duke to help get them (for a fee, of course).  All seems to be going well until the Duke tires of her.  When she finds herself on the brink of ruin, she determines that she will have her revenge on the men who have "used" her and brings about one of the largest scandals in British political history.

I have been a fan of Daphne du Maurier's work for a few years now.  This story intrigued me partly for it's plot, and partly because it is based on fact and the author's own family.

As it's title says, this is Mary Anne's story.  There seem to be two sides of her that is portrayed in the novel.  The first is her indomitable spirit and her ability to play the game in a man's world.  From the beginning she is unwilling to give up.  Even when fate seems to have her beat, she goes down swinging and many times finds herself back on top.  Her family is her ultimate prize and most of what she does is to get them the best food, the best houses, and the best future that she possibly can.  But it is this very ambition that ultimately becomes her downfall.  She refuses to settle, even though she could have saved herself quite a bit of grief by knowing when to walk away.  So many times she could have had settled down and had love and basic comfort, but her desire for security drives her on and on to ruin.

While most of the right ingredients were there (interesting plot, historical fact, lively characters), du Maurier just didn't seem to be able to quite bring it all together.  The storytelling lacks the emotion of her other works, and it becomes fairly tedious at times.  Mary Anne is not an easy character to like, and thus you aren't too disappointed by her eventual fall from grace.  It isn't a bad book, it just isn't as gripping as some of her other works.

This is a book that you could take or leave.  If you are a du Maurier fan you will probably read it, just don't expect the greatness of Rebecca.  If you haven't yet read any of her works, I would not suggest you start here.  I didn't love it, but it did have some good points that made it an interesting read.
Posted by bookwormans at 12:30 AM