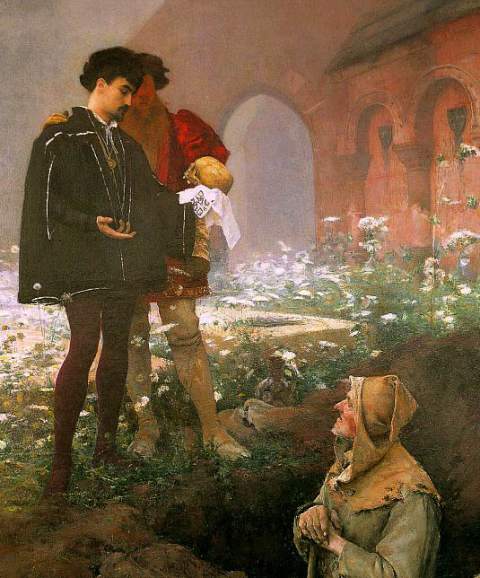 “There are more things in Heaven and Earth, Horatio, than are dreamt of in your philosophy.”

Of all the plays and poems written by William Shakespeare, there is perhaps none as iconic as Hamlet.  It is required reading for many students around the world and its lines and images are often what we envision when we think of Shakespeare.  It seems to have been his most popular play in his lifetime, and the role of the Danish prince remains a right of passage for today's Shakespearean actors.

Prince Hamlet is mourning the recent passing of his father, the King of Denmark.  His uncle Claudius has assumed the throne and hastily married Hamlet's mother, Queen Gertrude.  Hamlet is told of the mysterious sightings of a ghost resembling his dead father who is haunting the castle.  He goes to investigate and discovers that it is indeed the ghost of the old king.  The king tells Hamlet that he was was cruelly murdered by Claudius who coveted both his crown and his queen, and he charges Hamlet to exact revenge by killing Claudius.

Hamlet is uncertain of whether he can trust the ghost.  He begins to act as if he has lost his wits and Claudius and Gertrude struggle to understand what may have caused it.  There is talk that he may be crazy due to love for Ophelia whose father, the Chief Counselor, has opposed the match.  Events soon convince Hamlet that the ghost's story is true and he seeks to enact his revenge, even as Claudius tries to secretly have Hamlet killed.

Like most people, I was pretty familiar with the plot of Hamlet, though I had never actually read it.  It is Shakespeare's longest play and at times it can certainly feel like it.  The action alternates between slow and quick which at times can give it an uneven feeling.  But this is a classic for a reason and you can certainly see the influence it has had on our modern stories.

There is a lot going on this play that really highlights the upheaval of Shakespeare's time.  In many ways, the play has both a "modern" and a "medieval" feel.  The setting has a medieval feel with the ghost of a warrior king, revenge, and discussions of purgatory and "Christian burial".  But other parts, especially Hamlet himself, have a much more Renaissance flavor with lots of philosophizing, skepticism of the supernatural, and madness.  That is probably part of the reason the play remains popular today, because there are elements that we recognize as belonging to our times and not just the distant past.

This is one of the most quoted works in English literature and I was constantly discovering phrases that I did not realize came from this play.  Phrases like "To thine own self be true", "method in the madness", "Brevity is the soul of wit", "Sweets to the sweet", and "The lady doth protest too much".  Again, because it is such a huge part of our culture, everything about this play felt familiar.  That is great in some ways, but it also kept me from completely loving the play as there didn't seem to be anything "new" for me to discover.

I think this is a play that everyone should read simply to understand the cultural implications of the work.  It is certainly one of English literature's most important works, and Shakespeare's as well.  A good play, I just don't see it being one of my all time favorites.

I watched the 2009 PBS Great Performances version starring David Tennant as Hamlet.  It has a modern spin that is nice without being distracting.  The performances were also great with Tennant pulling off a Hamlet that could easily flip between sober and reflective to crazy and unpredictable.  Patrick Stewart was also wonderful as Claudius/Ghost, but who would expect anything less.  There are some scenes that are cut (Fortinbras does not come in at the end of the play), but overall it is a wonderful adaptation of the play.

Do you have a favorite performance of this play?  Share it below!
Posted by bookwormans at 8:09 AM