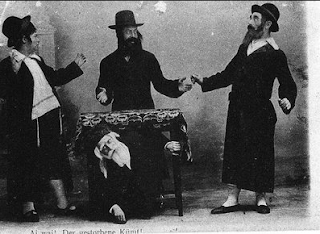 Like an older brother, he explained how stars wandered. He knew. He had studied about it in cheder. This was his learned explanation: "Every star is a person's soul. Wherever the soul goes, the person goes. That's why we imagine the stars are falling. But stars don't fall - they wander."
When it comes to the tradition of Yiddish literature, few authors have created stories that have captured the public imagination (both Jewish and non-Jewish) like Sholem Aleichem. Born in what is now Ukraine, Aleichem was a prolific writer in the Yiddish language, creating such immortal characters as Tevye the milkman of Fiddler on the Roof fame. In his 1911 novel, Wandering Stars, Aleichem brings the world of the Yiddish theater to life, and gives us a glimpse into a world that is at once glamorous and dark, inspiring and heartbreaking.

Leibel and Reizel are young friends growing up in a shtetl in Eastern Europe. The son of a wealthy landowner and the daughter of the local cantor, both are captivated when a traveling Yiddish theater group arrives. As they sit wide-eyed watching the performances, both feel a yearning to join that world. After disagreements with their parents, they agree to run off together and join the performers. But a mix-up occurs and when the group separates, the young people find themselves completely alone in this strange new world.

As the years pass, both become world renowned performers, Leibel as the brilliant actor Leo Rafalesco and Reizel as the enchanting singer Rosa Spivak. Their journeys lead them to London, Vienna, and America, and through many trials of greed, jealousy, romance, and heartache. Luck never seems to be with them as they always narrowly miss each other in each of the places they travel. Will these wandering stars ever be re-united, and if so, what will they find?

I have to admit that Yiddish literature is not something that I can claim to have had on my reading list forever. Not being Jewish myself, Sholem Aleichem was not a name that I was familiar with. But when I learned that he was the author of the stories that Fiddler on the Roof was based on, I knew that I had to add one of his novels to my list.

If I had to compare this novel to the works of any other author, it would be to those of Charles Dickens. I just see so many similarities between the two. There's the gritty side of life portrayed with humor, satire, and compassion. There's the somewhat bland lead characters surrounded by the numerous supporting characters who are each absurd and pathetic in their own way. And then we have the multiple stories lines that weave in and out, never seeming to have any connection until the last when all of the loose ends are gathered together into a complete (if not always satisfying) ending. I think more than anything it was these similarities that made me feel right at home in a world that has absolutely nothing in common with my own.

But though the plot revolves around Leibel and Reizel, the story does not. Aleichem is not concerned just with these two individual stars, but with the whole universe of the Yiddish theater. The first instances of a theater run by Jews for Jews begin to be seen around the 1870s, and by the turn of the century it was at its height. It was first popular in the shtetls of eastern Europe, and then spread to other European capitals like London, and finally to America. Throughout the novel, Aleichem shows the struggle of the daily life for these managers and performers, and also how even in the midst of the plain, ordinary acting permeating the theater, true art can still shine forth.

If you're looking for something a little different in your literary diet, this is a good place to start. The beauty, the dirt, the humor, the sorrow, and the resilience of Jewish life at the dawn of the 20th century are all found here. And though Alechiem never misses an opportunity to poke fun at his fellow Jews, he leaves us in no doubt of the quality of character that can be found among the people. L'chayim!

Posted by bookwormans at 3:17 PM