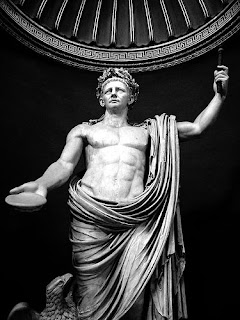 The hairy fifth to enslave the State,
To enslave the State, though against his will,
Shall be that idiot whom all despised.
He shall have hair in a generous mop.
He shall give Rome water and winter bread
And die at the hand of his wife, no wife,
To the gain of his son, no son.
In is his 1935 sequel to I, Claudius, Robert Graves continues to explore the life of the Roman Emperor, Claudius. Points of view are changed, old stories are rehashed, and characters we thought we knew are corrupted by circumstances.
The Plot:
Claudius the God begins where I, Claudius ends. The "idiot" Claudius is now ruler of the mightiest empire on the planet, and he soon begins to bring about the reforms that he feels Rome so desperately needs. The first part of the novel also gives us the backstory of Herod Agrippa, a fascinating character who will play a significant role throughout the story.
As the years pass, Claudius is forced to make decision after decision and often relies on the advice of his many advisers, especially his young wife, Messalina. Only when it is too late, does Claudius realize the truth behind Herod Agrippa's warning to "Trust no one."
My Review (Caution-Spoilers):
Like most people, I did not find Claudius the God to be quite as good as I, Claudius, though it is still a very good sequel. Graves' wonderful writing style does not diminish and Rome is as intriguing a place as ever. I especially enjoyed the story of Herod Agrippa as well as the different takes on early Christianity. Christians will recognize Agrippa as the Herod found in Acts who beheads James and imprisons Peter. The overall tone of the story, however, has changed for a couple of reasons.
First, it is that there is a lot less happening in the sequel (that we see). We are only really focusing on Claudius' 13 year reign, so we tend to see a lot more in the way of war, reforms in the legal sphere, and public works than we do of behind the scenes political wrangling and backstabbing. This made the novel seem rather long at times.
The other thing that changed the tone of the story was the change in point of view. We still see things from Claudius' point of view, but his point of view has changed. We used to see things from the eyes of an outsider looking in on the goings-on of the Imperial Palace. We laughed at the cluelessness of Augustus, shook our heads at the ambitiousness of Livia, and shuttered at the insanity of Caligula. Now we are seeing things from the eyes of an emperor with unlimited power. Graves gives a sympathetic skew to Claudius, who struggles to come to terms with his new found power. He always feels that he his doing his best and what any reasonable man in his position would do. This can be rather hard for us, as the readers, to swallow. There are many times when you want to yell "Open up your eyes! You're being used." and the ending leaves us with a rather cold feeling of defeat. But though it is painful to watch the downfall of a hero we loved, it really opens our eyes to what Graves' message is: that anyone, no matter how intelligent, moral, and kind, is likely to corrupt when given unlimited power.
Like I, Claudius, this is not a book that everyone will enjoy. Many of the same "moral" issues are present, though again, they are not given any unnecessary details. It is, however, a fitting sequel, and one that anyone who reads the original must read. The story must be continued, if only to complete the lessons that Robert Graves was trying to teach: namely the corrupting influence that unlimited power has over mankind.
The Movie:
The 1976 BBC mini-series I, Claudius combines both of Graves' novels into one telling.
Posted by bookwormans at 9:58 AM