Under the Greenwood Tree 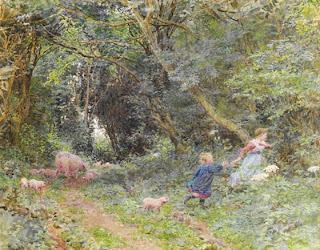 Thomas Hardy is often considered to be the last of the great Victorian writers. His novels often depict rural life for England's working classes and the overwhelming role that fate plays in their lives. Under the Greenwood Tree is one of his earliest novels, first published in 1872, and though it is a simple story, it is nevertheless a sort of foreshadowing of the great novels yet to come.

The Plot:
The novel begins on Christmas Eve in the tiny village of Mellstock. The local quire (choir) is making their yearly rounds singing Christmas carols to the villagers. One of these is the new schoolteacher, Fancy Day. One of the singers, Dick Dewey, is immediately smitten by the young, pretty teacher and sets on a quest to win her heart.
But he is not alone in his pursuit. Local farmer Mr. Shiner and Parson Maybold are also interested in Fancy, and her father prefers both of them to Dick. On top of that, the Parson plans to do away with the quire's presence in the church in favor of a new organ. As Mellstock's way of life begins to change, Dick seeks a way to raise himself in the eyes of Mr. Day and to secure the woman of his dreams.
My Review (Caution-Spoilers):
On the whole, Under the Greenwood Tree is an easy, gentle story and I found it to be a nice introduction to the Hardy's world. It is not gut wrenching and depressing like most of his other works and it is the only one of his novels in which no one dies. Many people see it as a "happy and optimistic Hardy", but that is something that I question for two reasons.
First off Dick and Fancy's relationship, while ending in marriage, is far from perfect. Fancy can be rather shallow at times and her final deceit does not bode well for their future relationship. Also, Hardy compares Dick and Fancy with other married couples such as Mr. & Mrs. Dewey and Mr. & Mrs. Day, both of whom seem to tolerate each other rather than genuinely love each other. We can certainly hope for better things for Dick and Fancy, but Hardy seems to suggest that it may not be quite what Dick had envisioned.
Secondly, though the story seems to center on Dick and Fancy's relationship, it is the Mellstock Quire that provides the true backdrop for this novel. They are a West Gallery Quire which were popular from 1700-1850. They provided the music at churches all over England and often tended to sing in more of a folk style rather than the modern hymn style. Towards the middle of the 19th century, they began to be replaced by organs which were cheaper to maintain and gave the parsons more control over the music. The folk-style was lost and modern hymns began to appear. That is the bitter part of this novel, the fact that many traditions and ways of life must give way to "progress".
Though it may be more of a bitter-sweet story than a sunshine and roses romance, it is still a delightful little read. It has such wonderful moments like the way Fancy convinces her father to let her marry Dick, or Dick standing in the frosty December air staring at Fancy's window. All in all, it is a funny, touching and nostalgic look at pastoral life in 19th century England.
The Movie:
In 2005, the BBC produced a version of this story starring Keeley Hawes and James Murray. It keeps most of the plot of the novel while adding a bit more strength and depth to Fancy as well as focusing a bit more on the class aspect of the story. Like the novel, it is not a very deep story, but it is still a pretty, romantic, and fun film to watch.
Posted by bookwormans at 8:11 AM

While I have not read the book, I did see the MT version and remember enjoying it. Thanks for the writeup!